How can cinnamon improve your health?

Commonly known as a good source of anti-oxidants, cinnamon is used from everything to spicing treats to making medicine.

Cinnamon is great for improving blood sugar control, brain function and cholesterol readings. There is recent evidence which supports supplementing your nutrient intake with as little as a few grams per day improves blood sugar control and blood lipids. The research was done using specifically diabetic patients, but I think that everyone can benefit from improvements in the way our bodies control sugar and insulin. 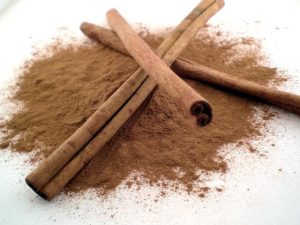 Here are some well known health benefits of cinnamon

Cholesterol is also improved with regular cinnamon consumption. LDL (bad cholesterol) is decreased and HDL (good cholesterol) is increased. It should be noted that a good ratio of HDL to LDL is closely related to lower heart disease risk.

Arthritis symptoms are also improved by consuming regular doses of cinnamon. It also helps with clearing up cold and flu symptoms. Simply mix a teaspoon or so with some lemon and hot water and drink.

Cinnamon has been shown to help the body beat off unwanted bacteria. This is great for fighting colds and flu, and works well for preserving foods.

If you’re studying or feel like you need to perk up your brain’s responsiveness, eat some cinnamon. In fact, there is research to suggest that simply smelling the spice can improve the way your brain functions. Amazing!

Tip: When cooking sweet potatoes, sprinkle some cinnamon powder on top of them before roasting. The flavour combination is delicious, and the added improvement in carbohydrate management brought about by cinnamon will mean less blood sugar irregularities.