Ginger has been used across the world for centuries for various medicinal and other uses. Ginger is the root of the Zingiber officinale plant, and is often eaten as a ground up powder, whole or in spice form.

It is part of a family of medicinal and useful family of plants including turmeric, cardamom and galangal, and is personally one of my favourite spices.

One of the most frequent uses of ginger is in the treatment of nausea, simply swallow a small amount of it minced and it should help reduce very effectively. 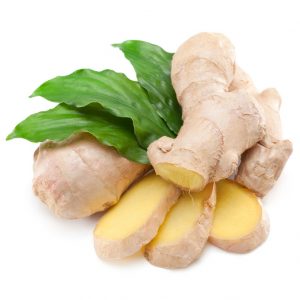 Ginger has shown great effects at reducing inflammation, especially in joints. If you’ve got a bit of tennis elbow or a sore knee that just seems to flare up every now and then, try some ginger. Put it in your cooking or just eat it in small amounts and see if it helps you out.

If you are an athlete this tip will definitely come in handy. There are great recipes to be made that have ginger as a base, and many Thai recipes make require ginger as a common ingredient, so stock up and get cooking!

Personally, I’ve found ginger helps with the treatment of headaches, and recent research also points to the use of ginger as a potent anti-migraine treatment. Who would have thought?

If you are travelling and get sick while moving easily, try some ginger. While they aren’t Paleo and loaded with sugar, keeping a handful of the commonly found ginger sweets on hand to deal with sudden onsets of car-induced-nausea is a great idea.

If you are constantly finding that you are hungry or need to curb the hunger pangs eat a little ginger. It is thought that ginger increases thermogenesis, increasing fat metabolism. There really is something to eating curries and meals with lots of ginger in it.

There is much opinion on eating ginger with sushi, but one of the most common understandings of its place in Japanese cuisine is to cleanse the palette before and after a meal. If you’ve got a flavour or taste stuck in your mouth eat a little ginger and it should clear up.

Particularly useful for diabetics in this regard, ginger helps improve insulin sensitivity and retard the rate at which carbohydrates are absorbed. There is some research which suggests that ginger is also good at improving cholesterol levels, particularly LDL cholesterol. (Read more about cholesterol here)

Have you ever noticed how your lungs and breathing open up after eating spicy foods?

Well, the attribution of this can be tied to specific compounds found in spices like ginger. Acting as a kind of natural bronchodilator, active compounds in ginger such as gingerols and shogaols help to relax the smooth cells of the lungs. These anti-asthmatic effects can be attributed to ginger’s potent anti-oxidant effects on the body. So if you are asthmatic or have a child that suffers from asthma try some ginger in their diet and see if their symptoms reduce.