What’s up with grass fed beef?

If you’re someone who keeps up with what a Paleo, easy to follow, healthy lifestyle is all about then you’ve no doubt heard or read about grass-fed animal products. What’s the hype? What’s it all about? I’m here to show you and at the same time compare two locally available grass fed brands of beef, which is perhaps the most famous of all grass fed products.

Grain fed, antibiotic pumped animals are obviously not optimum for human health. Sick animals would naturally produce meat that wasn’t that good for other animals set on consuming them, surely? Much of the literature points to the balance of Omega 3 and 6 being totally out of whack in grain fed, antibiotic pumped animals, especially cows, and this is not desirable when building a healthy diet. Grass fed on the other hand has good ratios of Omega 3 to 6, attributed to the animal eating the food it evolved to consume. Grain, on the other hand is often rich in Omega 6’s and upset the balance. If you were to take bets on your health, you’d pick grass fed animals every time.

On another perhaps less scientific note, grass fed beef tastes completely different. While grain based beef tastes well, like beef, grass fed versions taste much more gamey, similar to kudu if you’ve ever eaten it. I’ve heard from people that they prefer the taste of grain fed cows, but I think that the preference is entirely personal though not one that should make your decision for you. Grass fed steaks are also much more tender and aromatic, overall a no-questions-asked winner in my book.

This is also a simplistic write up on the benefits to be had from grass fed beef, but for the purposes of this article know that grass fed cows are happier, healthier and the meat is that much better for you.

On to the real “meat” of the article, pun intended ha ha.

I’ll be comparing two commonly found (if you know where to look, more on that in a second), locally produced grass fed steaks. Both are rumps and both are of a similar weight, size and quality of cut. I tried to limit preparation in order to allow both steaks the ability to exhibit their flavours and nuances.

I allowed the steaks to reach room temperature as per my usual steak cooking method, patted them dry with kitchen towl and lightly salted them with Himalayan rock salt. If you were a real connoisseur you would have salted the steak with coarse salt and allowed it to sit for a while before cooking, but I wanted to create a realistic “picked some steaks up from the store on the way home” scenario. 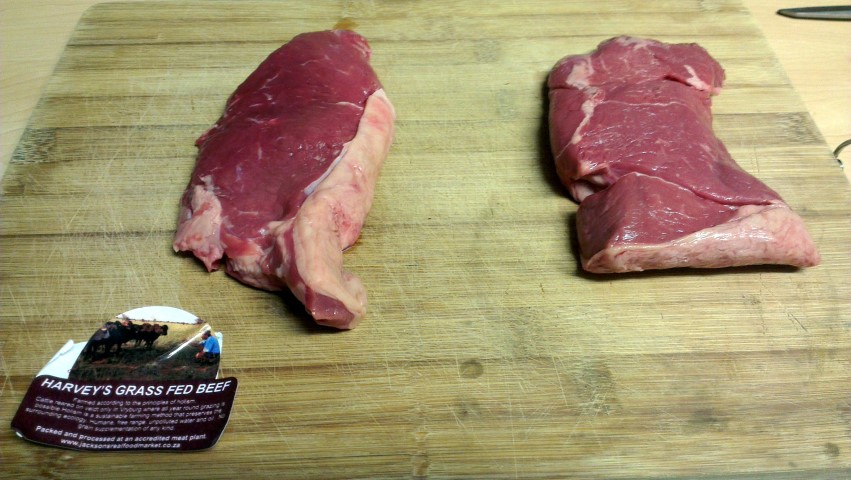 On the left, Harverys Grass Fed Beef and on the right Braeside Grass Fed Beef. Both are rumps of around 300 grams in weight and have a similar amount of marbling and fat on them. A big shout out to Jackson’s Real Food Market in Bryanston, Johannesburg for sponsoring the Harvey’s Grass Fed steak. The Braeside steak was sourced from the Farm Stall on Main Road in Kyalami, Johannesburg. 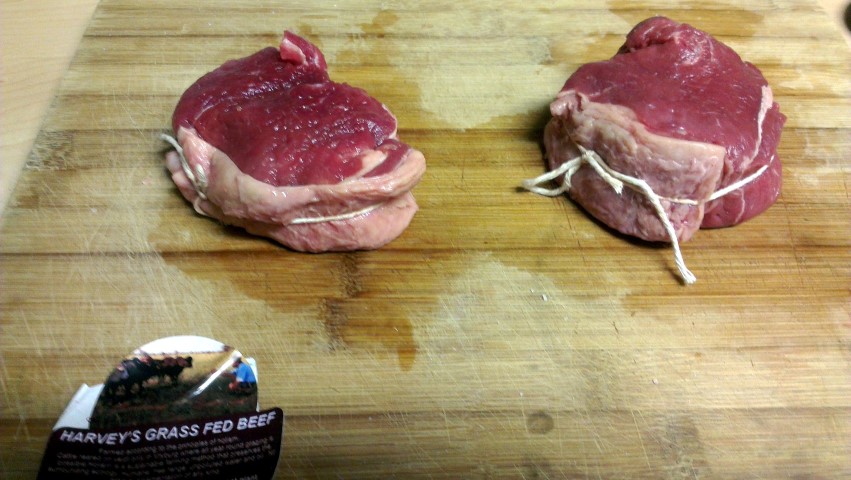 Sometimes I like to tie up steaks if they aren’t thick enough or flatten out when laid out in the pan. It’s a simple trick that works well for lots of cuts of meat, especially rib-eye’s.

I like to use a grill pan/oven technique to cook steaks if I’m not doing them on my gas braai/barbeque. However these were small steaks so I just used a single turn, grill pan on the stove method that worked out pretty well. In my opinion anything over medium rare and you’ve killed your steak, so I cooked them to medium rare deliciousness. 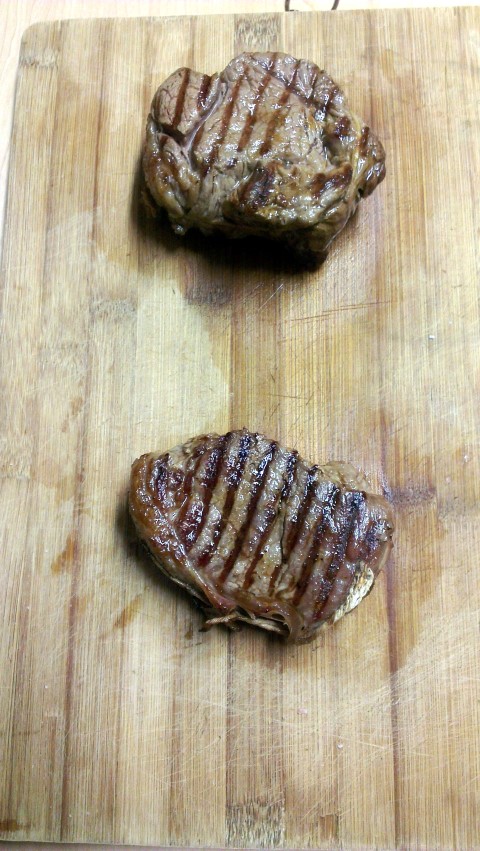 Harvey’s at the bottom, Braeside on the top.

So, let’s get down to it then.

Right off the bat the Harvey’s from Jackson’s Real Food Market smelt and tasted much more gamey than the Braeside, it also had a bit more of a grass fed fat taste, if you know what I mean. The Braeside grass fed was gamey, but not quite as much as Harvey’s, but it was just as delicious. Both steaks smelt great, looked great and cooked well. They were great eating and if you were served either, side by side I think you’d pick the Harvey’s as the winner, not because it’s that much better, but because I think it is just a better steak. One thing I must confess is that I’m not sure if Braeside have totally grass fed cows or if they have grass-finished cows, the difference is pretty important. Also, it may appear as though I’m being biased here towards Jackson’s Real Food Market and Harvey’s Grass Fed Beef because I was given some meat to try out, but I’m not. I don’t have anything to gain from recommending either brand, and all I’ve given is my opinion on which steak I thought was the best. Braeside Butchery do awesome work and I love their stuff, too.

All that being said, grass fed really is that much more delicious to me, and if you haven’t ventured out and found some I’d recommend you give it a try right away. Grass fed beef is a different, more wholesome and somewhat natural (if you could describe beef that way) experience over grain fed meat.

Give it a shot!

Harvey’s Grass Fed – I’m battling to find a link to a site for Harvey’s grass fed beef, if anyone knows please mail me and I’ll update the article.