What is the difference between the Banting diet and Paleo?

You have no doubts heard about “Banting” and the banting diet from various articles online.

The Banting Diet is referenced to in much of Tim Noakes’s work and writings. Most notably is its mentioning in the hit, best selling recipe book “The Real Meal Revolution”.

The Banting Diet – Where it comes from

Banting and the banting diet refers to the diet protocol by William Banting A formerly obese English undertaker who in order to lose weight cut back on refined, easy to digest carbohydrates.

He learned this way of eating from a physician by the name of Dr. William Harvey. Harvey however was using the then unnamed banting diet in the context of managing diabetes rather than specifically trying to reduce weight gain and/or accelerate weight loss.

These are common themes across all the low carbohydrate eating spheres and the Paleo diet is in fact referenced on Wikipedia’s page for William Banting.

The basic guidelines of the banting diet is to remove foods which are typically high in carbohydrates from your day-to-day diet for a period. These foods include potatoes, bread, pasta and anything that has sugar on it. William Banting also speaks about the efficacy of the banting diet based on his own experience as well as that of his physician Dr. Harvey. There is some reference to the diet working mainly on superfluous fat on the body and not on all fat in the body. We now know that low carbohydrate diets effect the way all fat is managed in the body and I suspect that the additional removal of some troublesome foods could be responsible for this.

Banting in a nutshell: 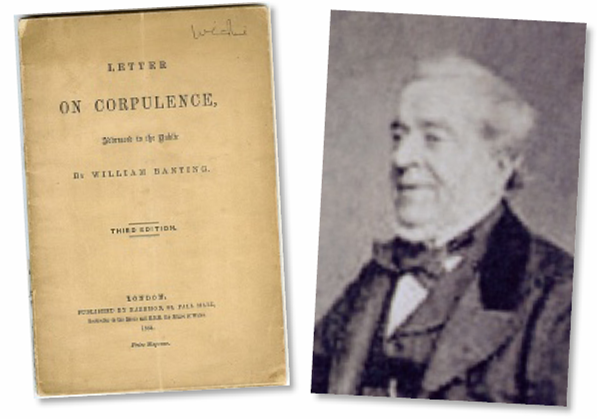 An Intro To Paleo

It is no secret that there are definite similarities between the Banting diet and the Paleo diet. The difference is that Paleo is much more evolved and has the fortune of scientific studies to back it up. Paleo/HFLC/Noakes/Banting diets all promote a greater amount of nutrient density in food selection, and I think this is an important point to focus on. It doesn’t take much to realise that a slice of bread has much less nutrients in it than say a chicken’s egg, and it is this sort of thinking that needs to take place in order to understand that it’s not only what foods you aren’t eating that count, it’s what foods you are eating count, too.

William Banting and the Banting diet certainly was ahead of his time in “discovering” that sugar and carbohydrate dense foods promote weight gain and the theme was only picked up again decades later. It is amazing how one man could have made such an impact on the world, and it is equally amazing just how the wool was pulled over our eyes for so much time with regards to the dangers of carbohydrates. Paleo also differs from the Banting diet (and many other diets in fact) as it’s food consumption limitations extend further than only carbohydrate dense foods. Grains are cautioned against because many of them contain gluten which poses issues for the digestive system. Legumes are another offender and are advised to be removed from the diet due to them containing lectins (also agitate the intestines).

At the end of the day it would make sense to go with the diet that has more modern knowledge of the way our bodies operate and process foods and nutrients. William Banting certainly discovered a great way to eat, especially if weight loss was priority number one. However, like the Wright Brothers and their first aeroplane, they invented something for others to take and fine tune, re-engineer and ultimately make better, and that is what Paleo is to healthy eating.

What is the real difference from the Banting diet?

It might appear that from the outside that Paleo and the Banting diet are the same thing. They are similar in core principles, but there are differences which can be noted and used to separate the two.

A core lesson that Paleo teaches is that it is focused on high nutrient intake above high fat, carbohydrate or protein intake.

This simply means that you should focus on eating the highest quality foods available whenever possible. This doesn’t automatically mean that following a Paleo diet is necessarily low carbohydrate, high fat or high protein, even though much of the foods that are Paleo “Okay” are in fact low carbohydrate.

This differs from the banting diet and the “Tim Noakes Diet” because they promote a hardcore low carbohydrate intake. The reality is that human bodies generally function better on low carb foods, but that shouldn’t be your primary focus when building what I consider a healthy diet.

Dairy is also turning out to be a massive difference between the Paleo diet and the Banting diet. Paleo doesn’t recommend that dairy makes up part of your diet because it is incredibly insulinogenic (boosts insulin secretion), and this is not good for weight loss. Remember, milk is designed to be consumed by baby animals that have growing bodies.

Humans don’t keep drinking human breast milk when they are adults, so why should we consume animal milk when we are adults. Do you see why this might be a problem?

Where Paleo Beats The Banting Diet…

I think that Paleo will win the test of time, so to speak. Paleo has been around for a long time in one way or another, and looking at Paleo dieting as an evolution of the banting diet is a good way of framing how they relate to one another. Banting in its purest form is a relatively older way of approaching eating for health, and was largely based on assumptions at the time. Paleo however is based on scientific evidence that eating like our ancestors did is generally best for optimal human health.

It is important to understand that nutrition research is constantly in flux and is a dynamic area of understanding. That’s not saying that nutritionists, scientists and researchers will turn around tomorrow and say that Paleo is unhealthy, I in fact believe the opposite will happen, but we must respect that new research will produce new understanding and with new understanding we get a better picture on how to eat for health, energy and longevity.

Eating Paleo starts with making sure that you are only eating foods that are nutrient dense, easy to digest and that promote a state of anti-inflammation in the body. This is the core focus of Paleo recommended foods and if you make it part of your lifestyle you will see results because the body knows how to be healthy, we’ve just got to send it the right signals.

Start getting the health goals you want with your free guide. Click here to get it emailed to you immediately.

Instantly start losing weight with your free copy of the 7 Steps To Paleo guide!