What are some of the most common gout symptoms? 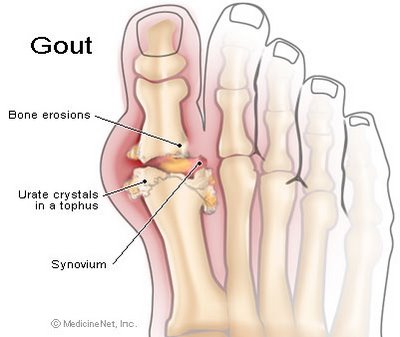 Gout is caused by the gradual buildup of uric acid crystals in the joints of the body. Uric acid is produced as a result from breaking down purines in our bodies. Purines  are in almost every cell of animal and plant materials. It is involved with the structure of DNA and RNA, and so is inevitably consumed every day by almost everyone.

When purines are digested, uric acid is produced. However the solution for decreasing gout inflammation is not to reduce the consumption of purine containing foods, but rather to focus what the source of the purines you consume is in order to promote an effective gout diet.

Insulin plays a big role in gout rearing its ugly head. If insulin levels are chronically elevated, the body’s excretion of uric acid is inhibited.

By increasing your insulin sensitivity, you allow your body to use insulin in normal ways, and so control blood sugar and ultimately uric acid excretion in normal ways.

Dietary protein has been linked to the increase in uric acid excretion, so try to eat more of it if possible. Have you noticed a trend leaning towards enhancing and managing the excretion of uric acid rather than focusing on its creation in the body?

Decreasing your carbohydrate intake will also result in the improvement of uric acid excretion. Decreasing the consumption of sugary drinks will also aid in your anti-gout efforts. A recent study found that sugary drinks had a huge impact on the development of gout in men.

Interestingly, drinks containing fructose are much more likely to contribute to gout symptoms than those containing regular sugar.

Sugar is enemy number one when it comes to gout…

A good fact to remember when it comes to trying to work out what is causing gout is that it has been linked to many other conditions. High blood pressure, diabetes and kidney problems all fit into the gout causing picture.

If you are diabetic your insulin levels are not normal, and so your processing of uric acid is probably not as effective as someone who isn’t diabetic. Insulin controls blood sugar levels, and so the consumption of fructose causes an even higher retention of uric acid in the body in someone who is diabetic.

Excessive uric acid has even been linked to a person suffering from mini-strokes.

Now that you know a bit more about what causes gout in most people (sugar and alcohol), you should be able to make the necessary changes that will decrease gout inflammation starting today.